The plight of undocumented immigrants has been in the news a lot recently, and there’s been much concern about the future of immigration in the United States. This issue particularly hits home for New Yorkers, who have tremendous pride in their city’s identity as a refuge for immigrants. Today, New York City’s population is approximately 8.5 million, and more than 35% of that is foreign-born. That diversity adds to the city’s rich cultural fabric, and gives us much to celebrate. It’s also a difficult time, as we see the worry of our immigrant neighbors in tough political times.

The Museum of Chinese in America (MOCA), located in Manhattan’s Chinatown neighborhood, has taken a subtle but powerful approach to the issues specifically faced by undocumented immigrants during these trying times. In October, MOCA opened a new exhibition titled FOLD: Golden Venture Paper Sculptures. The art in FOLD was created by undocumented Chinese immigrants who were arrested when the ship they were on, the Golden Venture, ran aground near the Rockaways region of the borough of Queens in 1993. Many of the ship’s 286 immigrants were detained in the York County Prison for multiple years. During their time in the prison, the detainees began making sculptures out of paper and other simple materials they had access to. The sculptures were first given as gifts to the lawyers and others who supported the Chinese immigrants as they sought freedom in the United States, and many more sculptures were made and sold to fund their legal efforts. FOLD contains 40 beautiful and unique sculptures that are now part of the museum’s permanent collection.

The sculptures are beautiful. Some are deceptively simple, while others are impressively detailed despite their humble materials. The artists used a variety of techniques to manipulate the paper – rolling, meticulously folding, paper mâché. There are American themes, especially bald eagles and the Statue of Liberty, as well as those with roots in the artists’ own Chinese culture. There are also caged birds, speaking to the situation the artists found themselves in.

Here are some of my favorite sculptures from the exhibition. 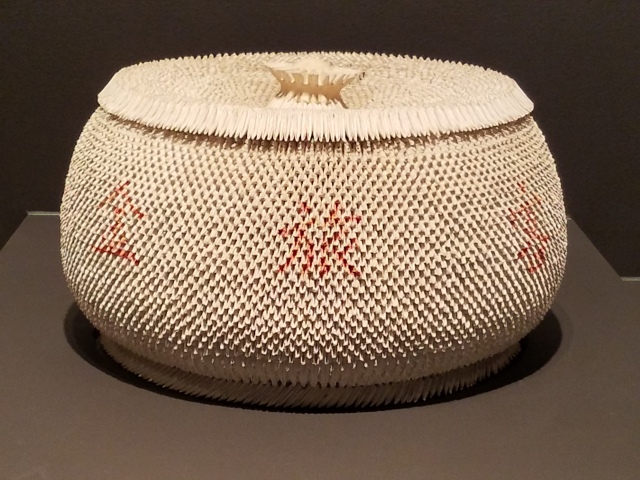 If you have the chance to visit the exhibition in person, I urge you to watch the short video on the Golden Venture as well. It was well worth the time. The exhibition is only open through March 25, 2018, so you still have time to see it. Instructions for getting to the museum, as well as other details important for planning a visit can be found on the museum’s website, located here.