Just a short distance from One World Trade Center and the 9/11 Memorial in southern Manhattan is the Irish Hunger Memorial. I was already in the area for another reason, but I saw “Irish Hunger Memorial” on the map on my smartphone, and I decided to take a short detour to check it out. What I was expecting was a statue or monument–what I actually found is so much more.

A visit to the intersection of Vesey Street and North End Avenue in southern Manhattan leaves you feeling like you stepped into another world. It’s not just a monument–it’s an architectural feature blanketed by a slice of Irish countryside. If you’re walking from the subway or PATH trains located near One World Trade Center, the view above is what you see first. A paved path meanders through lush green fields bordered with stone fences. The thick green field, which the Memorial notes is a fallow potato field, gently stretches upward as you extend your eyes towards the horizon. To the right, there’s a crumbling cottage. It’s beautiful, and somehow haunting.

To access the Memorial, designed by Brian Tolle, I had to walk around to the back side, which faces the Hudson River. The Memorial is cantilevered over the sidewalk. Underneath, the base alternates strips of stone and backlit frosted glass displaying quotes about the Irish famine and modern-day accounts of world hunger. The dual message is part of what makes this Memorial unique as well–not only does it tell the story of the Irish famine of 1845-1852, a tragic event resulting in mass starvation and Irish emigration to the United States, but it also brings attention to current issues of hunger around the world. 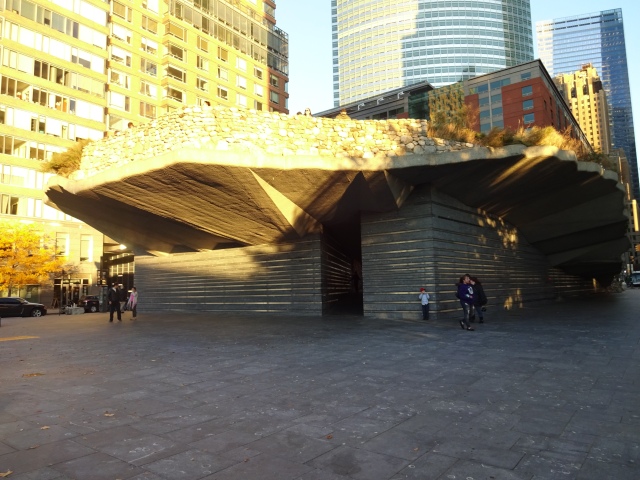 I entered through a tunnel with quotes mirroring the design of the exterior base, emerging at the other end in the abandoned stone cottage. 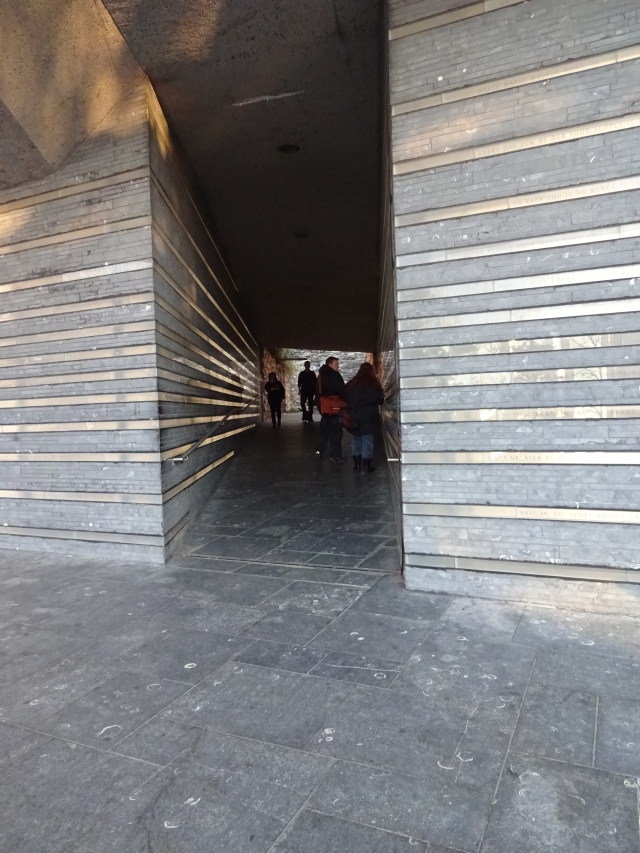 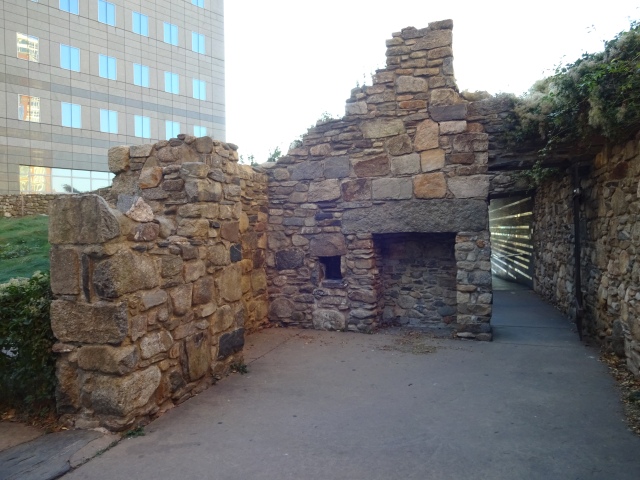 From there, I made my way up a slight hill to the top of the Memorial. When I turned back and looked at the Memorial from this perspective, it was beautiful. This perspective also emphasized the Irish Hunger Memorial’s location, situated among the tall, modern buildings of Battery Park City.

This is also a great vantage point for photographs beyond the Memorial. First, here is a photograph looking at the view across the river from the Memorial, towards New Jersey. (As you can see, the sun was setting.) 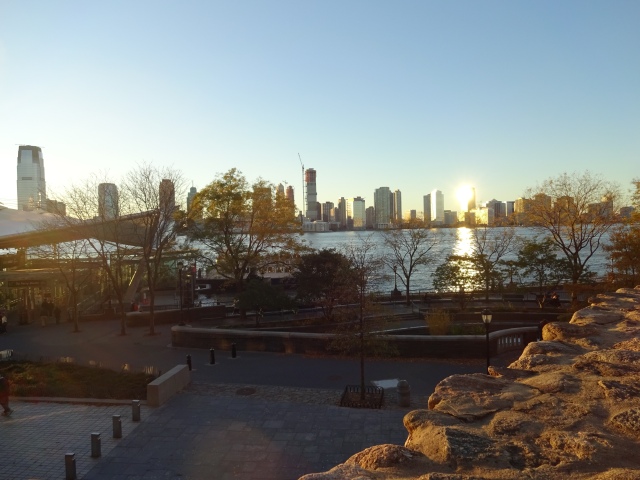 This other photograph was taken looking back at One World Trade Center. As the sun sets, you see the reflections of nearby buildings in the skyscraper’s glass windows.

There’s also a free app for iPhones and android devices. I didn’t realize it existed until after my visit, but I may have to go back with it to make sure that I get the full experience. From the app’s description, Memorial designer Brian Tolle provides an introduction, and there is a self-guided tour that points out each part of the exhibit.

How do you get to the Irish Hunger Memorial? The best way is by public transportation, as a number of subway lines stop nearby. Take the A, C, E, 1, 2, or 3 train to the Chambers Street stop, the R to Cortland Street, the 2 or 3 to Park Place, or the 4 or 5 to Fulton Street. You can also take the PATH train to the World Trade Center stop.

One thought on “A Piece of Ireland in Manhattan”